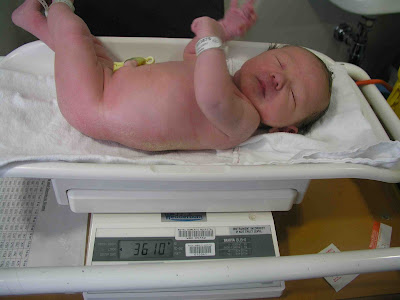 ::update:: found this photo of when Annie was born and weighed. They look a like, don't you think? 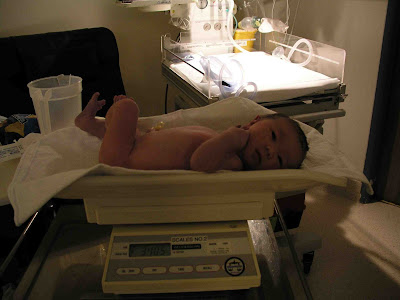 I'm not quiet sure how to begin this birth story. I have an urge to start it with Annie's birth story as it paves the way for so much of my thought and wishes with this one.

To recap: Miss Annie was induced a week over her due date. I spent a long and sometimes annoyingly painful two days strapped to monitors in Sandringham hospital. On day three they told me I wasn't even quiet 1 centimeter. *sigh* They broke my waters, encouraged contractions but 6 hours later I was still that measly 1 cent. At this stage I begged for an epidural and in hindsight it was the best thing I could have done. With the threat of a C-section looming I felt weary and emotional and as if my whole birth plan had been blown up by the Americans. I surrendered. And because I did, I fell asleep and managed to wake up two hours later, full dilated and ready to push. That epidural saved me from a worse faith and for that I will be eternally grateful.

On Wednesday night 08.09.2010 I went for my 40 week checkup. My midwife laughed when she saw me. 'Surely you should have a baby by now?' she exclaimed. We had been joking non stop about this because for weeks now I had had serious Braxton Hicks and as my midwife put it 'a head so far down it was ready to come out any second!'. I was pretty emotional at this appointment, feeling that I would NEVER have a baby. I was due to head to a friends after wards, but feeling exhausted and highly sensitive decided not to go. Thank god for that.

At 11pm on that same night I woke with period pain. I would describe it as cramping in my lower abdominal. I came and went and for the first time in months, I could not go back to sleep. I decided to time them.

Shit. That's a bit fast, I thought! I decided to jump in the shower. My midwife had said that if when in the shower the pain does not subside, you're probably in labour. As the water pounded my now aching lower back i noticed we had dropped to 2 & 3 minutes apart. Things were speeding up.

I woke Ben. He sighed. I think every time he looked at me over the last month of this pregnancy he thought 'the 30-something year old who cried wolf!'. He patted me groggily and said 'when it's time it's time chook'. I mentioned the 2-3 minutes apart and that roused him from sleep. We called the midwife who listened to me over the phone for 10 minutes. 'Ok, that's 5 in ten minutes, I would get going to the hospital if I was you'.

No arguing with that! We bundled Miss Annie into the car and met my parents at 2:30 in the morning at emergency Royal Women's. They took my baby girl home and I was admitted at 3am. The midwife on duty was a little aloof. I wasn't sure I liked her. She came in and out of the room without speaking much and only touched my stomach occasionally during a contraction. She mentioned we might go home again - I shot Ben a look that screamed 'Not bloody likely!'

At 4am she announced that I was 4 centimeters and doing well. I decided to shower. It helped - a lot! After an hour of being in there with Ben spraying me like a beached whale, I got out. I strapped on the tens machine and buckled in for a bumpy ride.

(Let me just say that I had no grand plans about this birth. I had read Ina May Gaskins book and watched numerous episodes of 'One every minute' on SBS but really I figured I would just give it a shot and if it got too much 'hook me up love'.)

Throughout the next hour or so the contractions really increased. Sitting on the toilet with the gas was one of the only comfortable positions I could muster. I begged the midwife to tell me what stage I was at, but she just kept saying 'you're doing really well, that's all you need to know'. Before long I was begging Ben for help. 'No more, no more, no more, no more, no more' became my chant through contractions. He left the room to move the car (hello?) and the midwife went outside to flap around. I stood next to the bed, bent over it, naked from the waste down, clutching my gas and focusing on my breathing. Not having them there to whinge too helped, and I learn't later that it was a planned strategy the midwife had concocted with Ben.

When they reentered the room I began begging for help again. 'I want an epidural' I spat. Again I got 'You're doing great, just wait until the other midwife gets here, half and hour and then we'll get you sorted' BOLD FACED LIE! Within 20 minutes I complained that there was pressure below. My midwife encouraged me to get on all fours on the bed and start pushing...

...Ok stop. This is where I freaked out. Did she say 'push'? My brain started to numb (could have been the gas) I stopped momentarily and took that comment in. Oh shit, I thought. We've come too far now. There's no going back. This would be a drug free birth whether I liked it or not. I buried my head in the pillow, left the gas permanently in my mouth and turned the tens machine on to 'REALLY TRULY PAINFUL'.

Over the next hour or so the midwife and Ben coached me through the most pain I think I've ever felt in this life. All of it bearable though. I could feel his head as it moved down the birth canal. I moaned at the pressure of it all. When I got the urge to push I relished it. I pushed slowly and thoughtfully all too aware that I didn't want that head tearing any part of me. We got to the crowning and like some poster child for birth I yelled 'It stings!'. With another push I felt the most amazing thing. My vagina came back together around his neck. The relief was immediate. I felt his little body turn giving him the best chance to get his shoulders out and with one mighty push he slipped right out of me.

I kept sucking on the gas. Ben buried his head in my hair and said 'you did it, you did it.' over and over and over. I was a little light headed from the gas but managed 'What is it?'.

I couldn't spin around fast enough. The Tens wires were all wrapped up and the gas machine fell to the floor. I just was not going to believe it was a boy until I saw him.

And there he was. In all his wondrous glory. A little boy. Perfect and sweet and with MASSIVE balls. I held him close. I kissed his yucky head. I thanked God it was all over. We stayed like this for a hour as they tended to my 1 stitch and called everyone we knew to tell them the news.

I went into this pregnancy looking for one thing - to go into labour naturally. It was my only goal. I came out of it having the most amazing experience of my life so far. It was a damn painful one, but by god it rates high on my list of things that rock. I managed to conquer the fear of the pain, rather than the pain. It was a moment for me. It was a hurdle that I think has been holding me back for far to long. I'm way too cautious, not spontaneous, always worrying about what might happen rather than what could happen.

My midwife was sent from somewhere very special. She got me. She knew how to get me through. I will be forever grateful for the experience I had at that hospital and with those people. This vigour for life has charged me into my care with Tom. I am far more relaxed. I am much more maternal. I am slowly edging towards the person (the mother) that I have always wanted to be. I don't just put that down to Tom's birth, I put it down to my rebirth. Someone who wont let fear stand in the way of all that life has to offer.

And that's it. My story. It's by no means spectacular. In fact, it's probably only interesting to me, and maybe Ben, and possibly Tom when he's 20.

I wish I could say that you sharing your amazing birth story has made me feel better about my own impending labour, but it hasn't. I have been terrified of it since I found out I was pregnant - having an entirely different first birth experience to your own (completely natural - not even bloody gas! - water birth), I know what pain I am in for this time & I am just oh-so-scared that I won't be strong enough to do it again. I keep reliving the worst parts - like transition & the actual pushing - ARGH.

It's ironic because the first time around I had no fear at all, not even the slightest aprehension. Birth was natural & everything would be fine. Pfft.

I'm going to keep giving myself pep talks until the time comes, so wish me luck!

I am so happy that your experience was such a positive one that has actually contributed to a different outlook on life altoghether - that is amazing!

Enjoy your little boy snuggles hon, you did good. ;)

What an amazing, beautiful birth story. Thank you so much for sharing it. I could say a thousand things to you...but don't even know where to start. I am just so pleased for you!!!

Oh Em, I can't tell you how delighted I am to hear the joy and triumph in your birth story.

What a healing experience for you all. Such insights gained. THIS is the stuff of life.

(and you're right. when the head comes through and your body re-forms around the neck it does feel WONDERFUL!!!)

Bless you, bless you, you've made my night

What a great birth story - I am so pleased you had such an empowering experience.

Tom looks gorgeous. I hope Annie is having fun as the big sister. Enjoy your wonderful family of 4!

Oh, and love the name too - my little one is also a Tom.

So happy for you Em! I was reading your birth story with interest, soaking up every detail of your story. I ended up in tears about how you feel your labour changed you. I have had two natural births but never thought of what a journey it is in conquering fear. We are stronger than we know. As I said - I'm so happy for you. Welcome to the world little boy. x