I waddled into my 41 week appointment feeling like my pregnancy was going to last forever. Besides the few odd niggles here and there, I had no hard evidence that I was ever going to go into labour. After a brief check up, my doctor agreed. This baby was not coming on it's own. She gave me two inducement dates. Australia Day and that afternoon at 3pm.

As you can imagine, my world began to spin. I hadn't counted on being induced and further to that, to being induced that very day. However, the doctor pointed out that if we waited until Aus day, I would need to be constantly monitored over the weekend anyway. A quick call to Ben and I was driving back to our house to pack my bags for the hospital that afternoon. I note here that I was so teary at this stage. Full of nerves and scared. I knew very little about inducement. I had prepared to labour naturally (and possibly with drugs) but this was new to me and it took some time getting my head around it.

Ben and I were admitted at 3pm on the Thursday evening. They inserted gel to try and get the lazy old cervix to open and monitored my uterus and the baby's heartbeat the entire way. All Thursday night I was woken every two hours for assessing. I was tired. I thought I felt some pain. I was full of anticipation!

The next morning the doctor told me that I hadn't really moved much at all. We were talking less than a centimetre. So more gel was administered and Ben and I spent all day Friday waiting to feel the full force of labour. Later that night, some pains and contractions started to take over so I hooked myself up to the Tens machine I had hired and waited with bated breath.

Again, they monitored me all Friday night, every two hours. My sleep was so broken. I felt scared. I wished Ben could stay with me. Saturday morning another female doctor came to examine me. She was trying to determine whether she would be able to break my waters. She took one look and muttered 'still only 1 centimetre'. She noted that if she couldn't get in there and break my waters we were going for a C-Section. After she tried once, I grabbed the gas and sucked it down. She only just managed to get in and effectively break my waters. And man, did that hurt! Once my waters were broken, we got onto to the drip that brings on contractions. Oxytocin (sp?)

What felt like contractions started to come at regular intervals and with the help of the tens machine and Ben counting and chanting with me, we managed to labour naturally for over 6 hours. After that I was examined again only to be told I was only 2 centimetres dilated. The doctor gave me the following speech.

'usually, at this stage, I would be giving the mother a pep talk. telling her you're doing really well, you're over 8 centimetres, not long to go! But I don't have a pep talk for you Emily. If you don't move another few centimetres in the next three hours we are taking you downstairs for a c-section'.

My world crumbled slightly here. All that hard work and effective pain management for nothing. I felt so defeated and so tired. And suddenly the pain engulfed me. I told Ben and if I was going to labour another three hours without any assurance it would do anything, I was going to need pethidine. The midwife got on it quick smart, but the moment I had it, I regretted it. The drug was making me sleepy and so unable to focus on Ben and the pain management techniques we had practised. I felt the contractions override me and I asked for an epidural.

Once they had given me what I craved, I feel so subdued and relaxed. Part of me felt guilt and a bit of a failure, but I also felt that this labour was totally out of my hands. That all we had planned went haywire due to being induced. I slept soundly for two hours and woke up 9 centimetres dilated with a team of midwifes encouraging me that there was only 1 hour to go before I could push our baby into the world. At that moment I HAILED THE EPIDURAL!!!! No c-section for me!!!!!!

An hour later, surrounded by four extraordinary midwives, a fantastic doctor and my beloved husband, I began to push my daughter into the world. It took all of one hour and a half, a cut and a little old friend called the vacuum and Annie Jane Brocklesby was born. They placed her on my stomach straight away and after a little examination from dad, we confirmed we had ourselves a little girl. She nuzzled into my chest, not making a sound, and proceeded to take everything in. Dad helped with the weighing (3.5 kilos) and the placenta and before long we were snapping the first few photos as treasured memories. 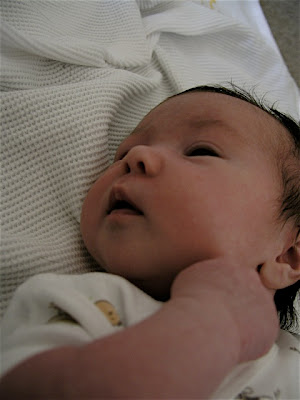 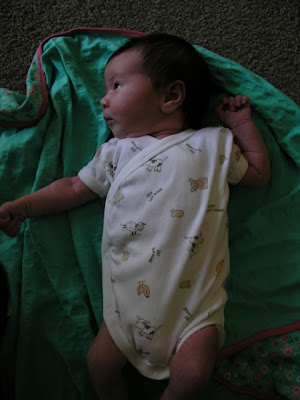 At the same time, I felt so relieved you were safe. So content you were here. So happy you had made your dad smile at me that way. So overwhelmed at your beauty. So confounded by your touch and ultimately, so insanely in love with you that I thought I should die if something would happen to you. My love for you feels instant, unbounded and so very very real. Welcome my sweet one. Welcome to the world. Welcome to the rest of your miraculous life.

Ah, Emily, I'm so thrilled to hear of your adoration for sweet little Annie.

And well done on pushing her out my darling. Shame they (the docs) scared you witless with all the 'only' and 'CS' language. I'm glad you were encouraged by the midwives.

Your cervix dilated very promptly once you were relaxed, you have passed a baby through your pelvis and the next birth will be far less drama.

Well done, well done my darling, I'm delighted for you all. She is a beauty and YOU TWO MADE HER!!!!

Awesome job Em! What a marathon labour. I'm so impressed with you. I do wish doctors wouldn't threaten the c word like that. Actually your story reminds me a lot of my labour with J. Only you worked much harder and longer than I did!

Congratulations! You did an amazing job and have a beautiful little girl to show for it.